One of the reasons that we keep asking Zoe Knighton, cellist from the Flinders Quartet, to our play-ins is that we never run out of things that we can learn from her. And she also never runs out of enthusiasm, encouragement, and humour.

Sometimes a group just wants to play through a piece, and at other times they want to work on it to polish it for a performance, or just to play it better. At our third play-in for 2016, Zoe gave a workshop titled “decoding rehearsal techniques” which looked at how a chamber group can more effectively rehearse.
The workshop demonstration group had sight read the Schubert trout quintet in the morning, and before they could think about saying no, were under the spotlight in the workshop.
With a bigger chamber group, keeping together can be challenging, and Zoe demonstrated a number of interesting methods with the group. Many of these related to getting each player to listen more to other players. Zoe had the players turn around so that they were facing away from each other, taking the focus away from watching each other, to listening to each other. It was surprising how together a group can be by just relying on hearing rather than sight. Another experiment was to swap the players around to encourage them to hear the other parts that they may not usually listen to. ​
For all of the methods Zoe suggested, repetition was an important technique, taking segments of a few bars or a short passage and looping these to perfect whatever the group is working on.

Another focus of the workshop was phrasing, articulation and emphasis, and the Trout third movement was ideal for illustrating these concepts. There are many possible choices for how short to play each note, and the dynamics for each note within a phrase, and with five players left to make their own individual choices, the result can be a somewhat random mix. For articulation, Zoe had the group starting with a legato version, then becoming increasingly separated until it seems about right and then rehearsing this together. Sometimes the best choices aren’t clear or unanimous, but the important thing is to make a choice and for all players to adopt a single approach.

The difference in the movement from the start of the workshop to the end was quite dramatic, in terms of ensemble, and presentation of an interesting and unified interpretation. 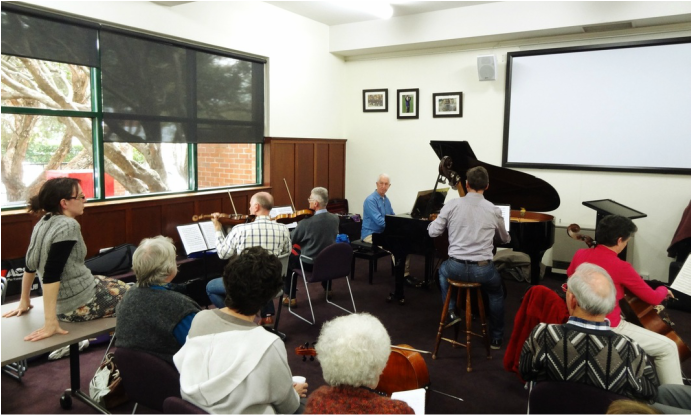 Zoe sees how the trout sounds while facing backwards